When the city of Boston kept expanding in the 19th century, landscape architect Frederick Law Olmsted thought of the ‘Emerald Necklace’, a network of parks, connected by landscape routes. This Parkway-system became a luminary example for many American as well as European cities; and to this day these Parkways do what they are meant to do. They take you out of the city, into the countryside.

The Randstad does not have such a Parkway-system. A fine, pleasant and logical routing network, allowing you to cycle from Delft along the beautiful canal to Schiedam and back again via Westland seems unlikely for Randstad inhabitants. Which is strange.

Holland is a country on 100% water basis. The landscape appeared out of- and from water, from reclaimed peat bogs, and impoldered lakes. It is an inverted world, where the land is low and the water above. For centuries, these waterlines connected everything with everything, they have been the reclamation bases, the historical veins of the landscape where dikes, houses, windmills and ribbon settlements coincide. 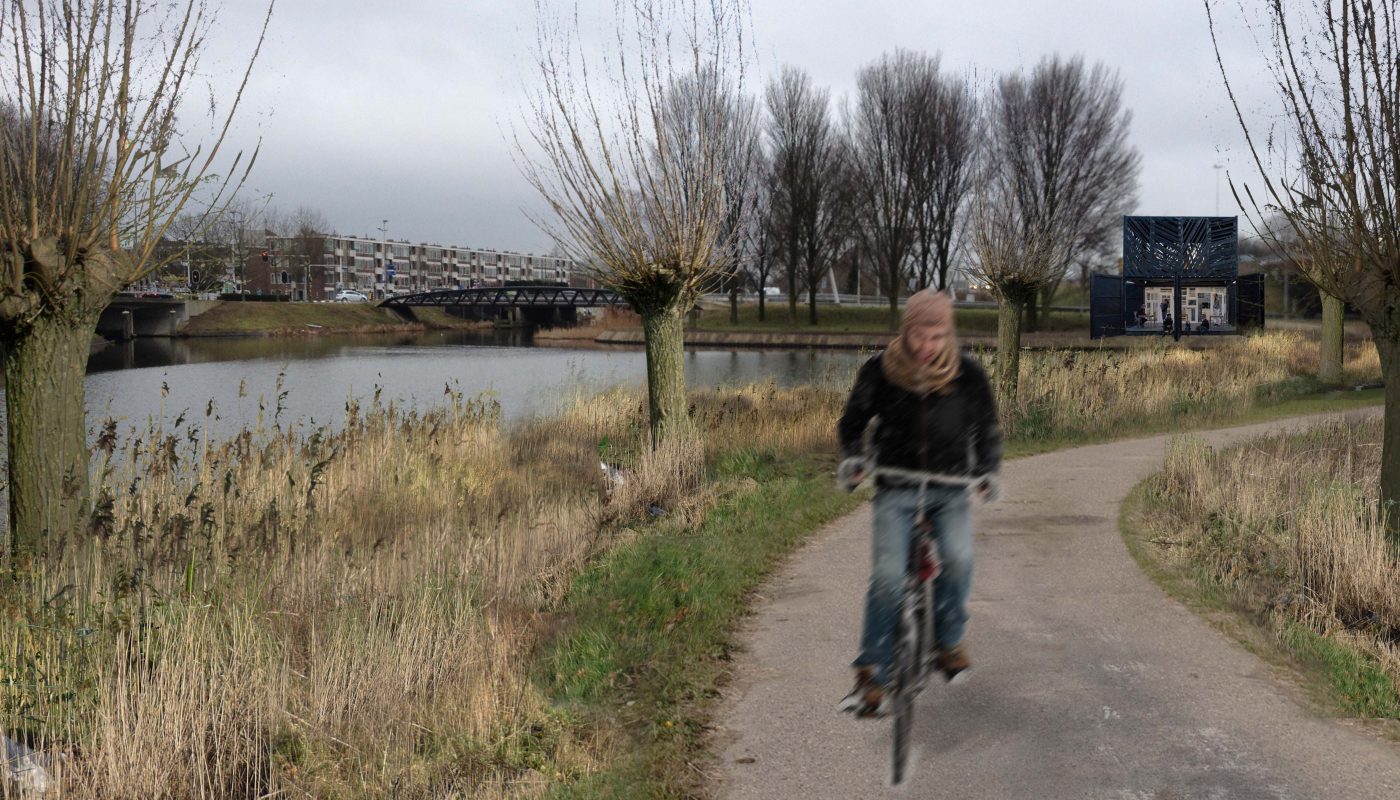 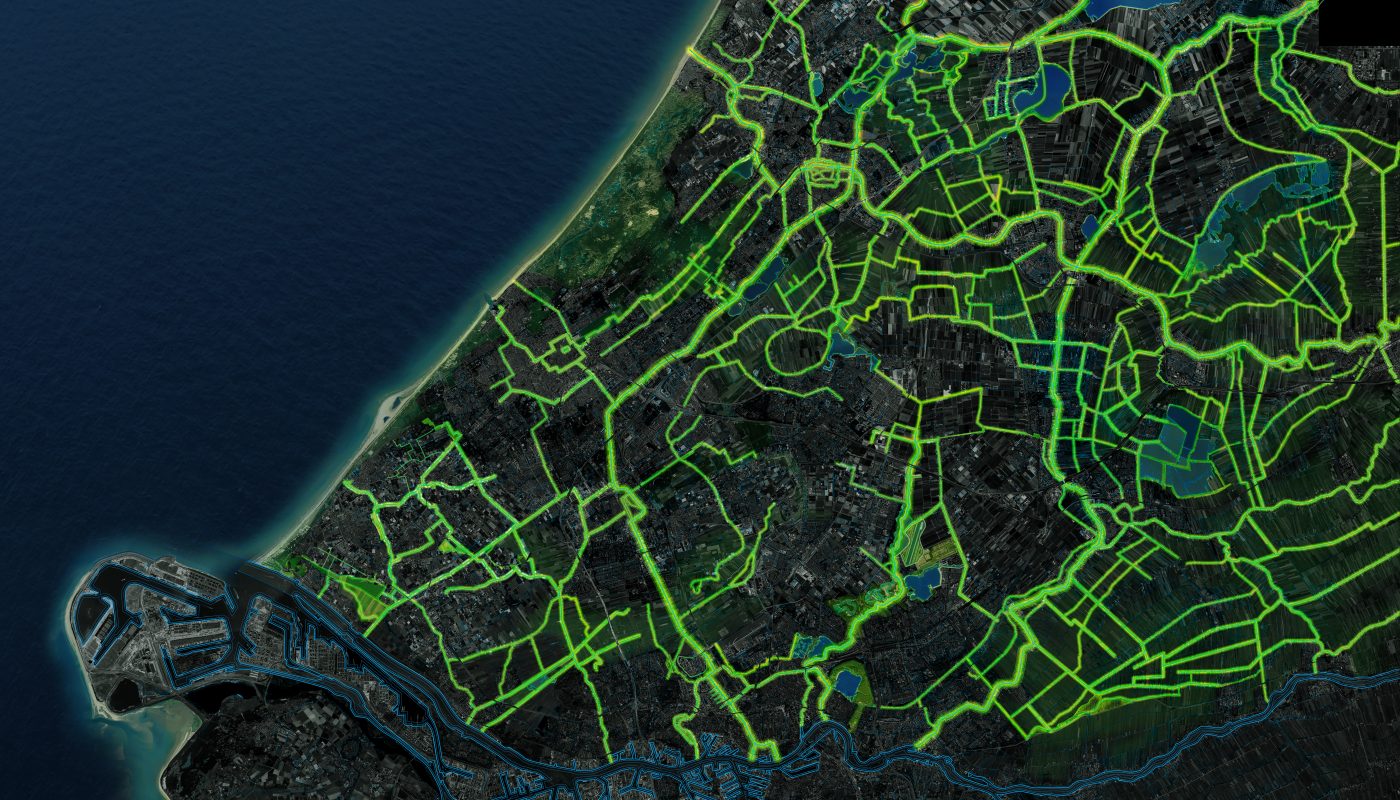 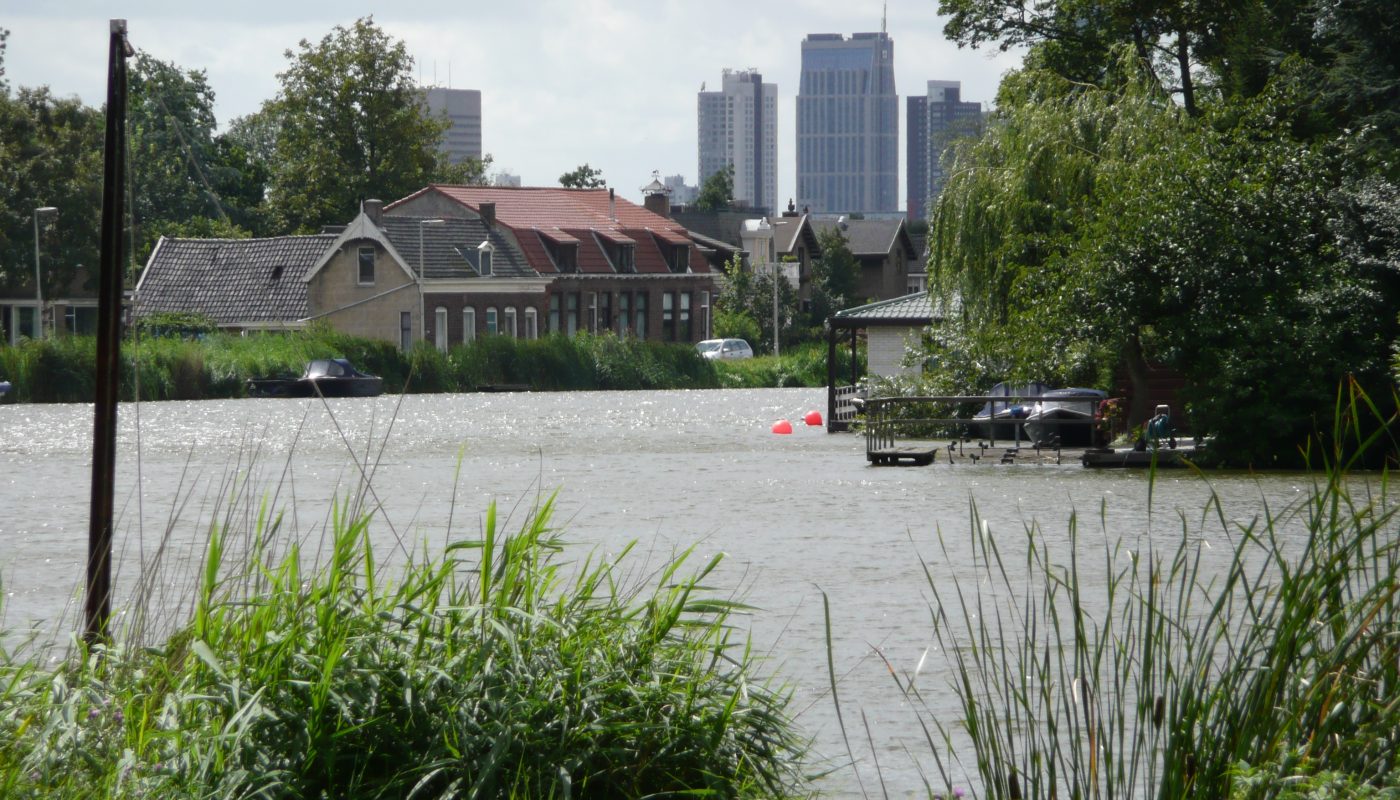 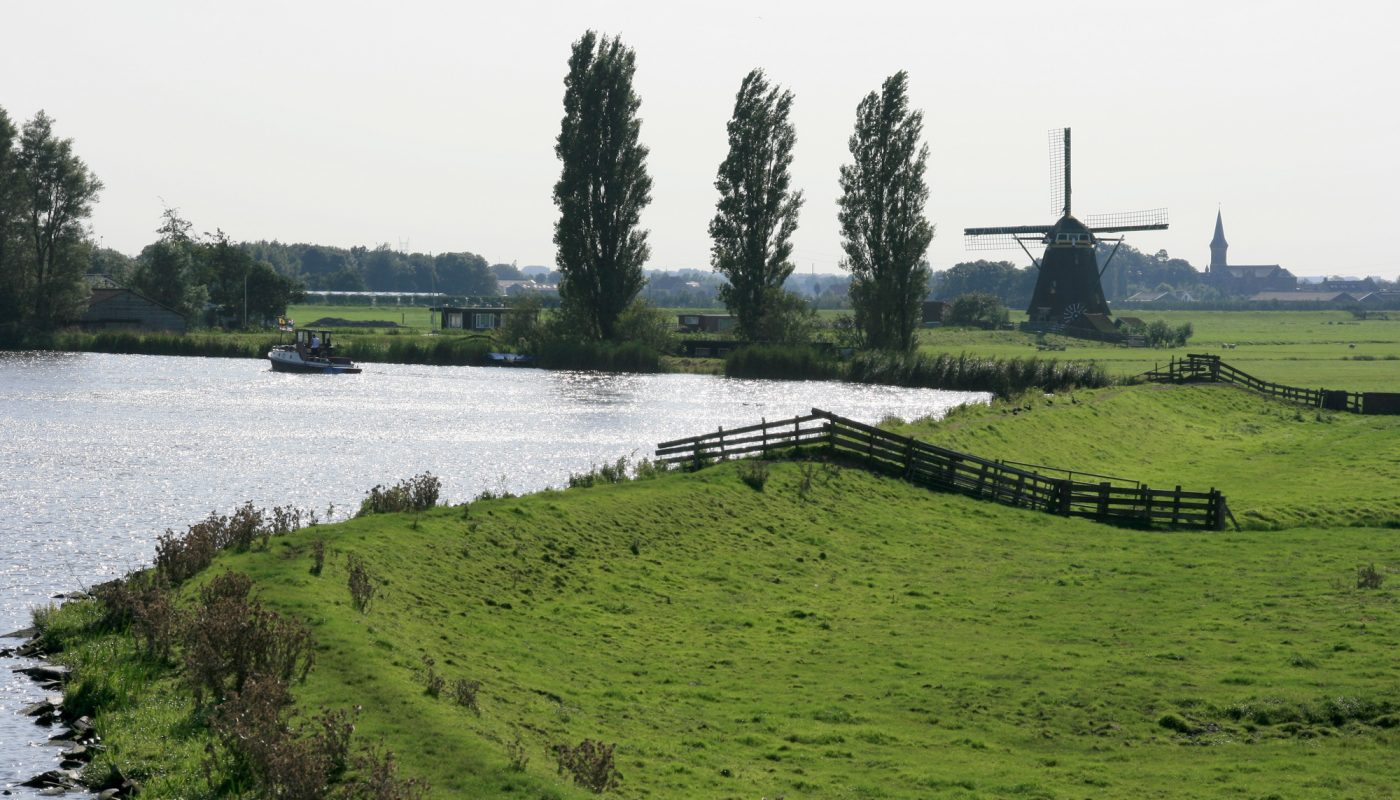 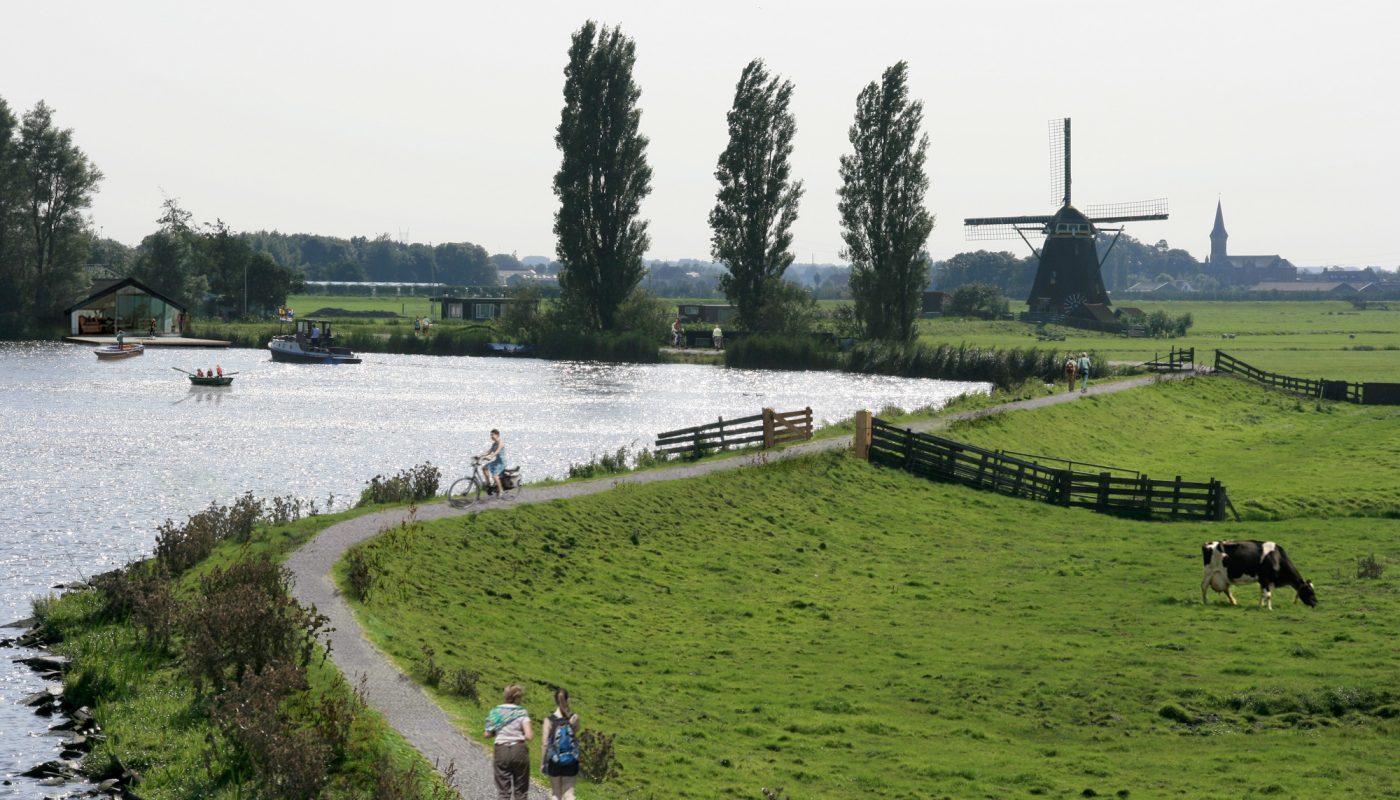 These Ribbons alone are the cultural heritage backbone of the Holland Landscape, including all the landscape ingredients.

These Ribbons prove to be the connection between the extremes of the urban spectrum; they link the town centers of the Dutch water cities to the hearts of the Dutch polders. But Ribbons are no longer Routes. Per boat perhaps, one can sail from the Rotterdam Euromast to the Amsterdam canals. Needless to say, sailing is not the main mode of transport these days. And of course, the old waterway-system was never combined with cycling- and hiking paths. Occasionally tow paths for track boats can be found, asphalted into a bike lane, but every so often those routes are cut off by small business parks facing the water side.

The canals are rarely sailed. Sheep are grazing at the quayside, fences restrain us to keep going. The water itself can even be a barrier, preventing us from reaching the quay at the other side. For a coherent network, this is obviously disastrous. One missing link and the route has no connection anymore; instead, it becomes a double dead-end.
Researching the waterway-system from this perspective outlines a potential extensive landscape park that shows Holland’s most beautiful places. And detecting those missing links, makes the focus all the better. These Long Ribbons of the Lowlands are thé potential recreative Parkway-system, presenting the best of Holland on a silver tray, connected through fantastic Routes.

The network runs from heart to heart, through the Dutch water cities, as well as the Dutch polders. And via all the many areas in between, that are neither city nor countryside, but town-like, rural, where the old and the new world clash or collide. The network discloses the variety of flavours the Holland Landscape has to offer. The realisation of this recreative, cultural heritage- and landscape-based route system is highly demanding. But compared to Olmsted’s Parkway it does not have to be built from scratch. The greatest part is already present. We only need to connect it all and solve some bottlenecks-issues.

Running down the network will show many more cases. Chances that you would have missed. Business parks on watersides where great neighbourhoods at the Long Ribbon could appear. A country estate instead of car dump that could strengthen the park-like setting of the Route. The derelict farms turned into water-cafe. It all starts with the perspective. Because you only notice it, when you see it. So please do have a look.