A heavenly collection of architecture above a radical green city. Circular, nature-inclusive and energy neutral. Architecture that creates energy from the elements wind and sunlight floating above a lush green world where besides birds, bats and butterflies also people live, work and play.

The VDMA-area in Eindhoven, an 18.000 m2 former industrial zone next to the city centre and railway station, consist of an old matchbox factory, a former dormitory for nurses, several old villas and a parking lot. In 2017, the city of Eindhoven started a big tender procedure for the sale of the terrain. For 2 years, our team worked through 3 rounds and 20 competitors and got in second in the end. 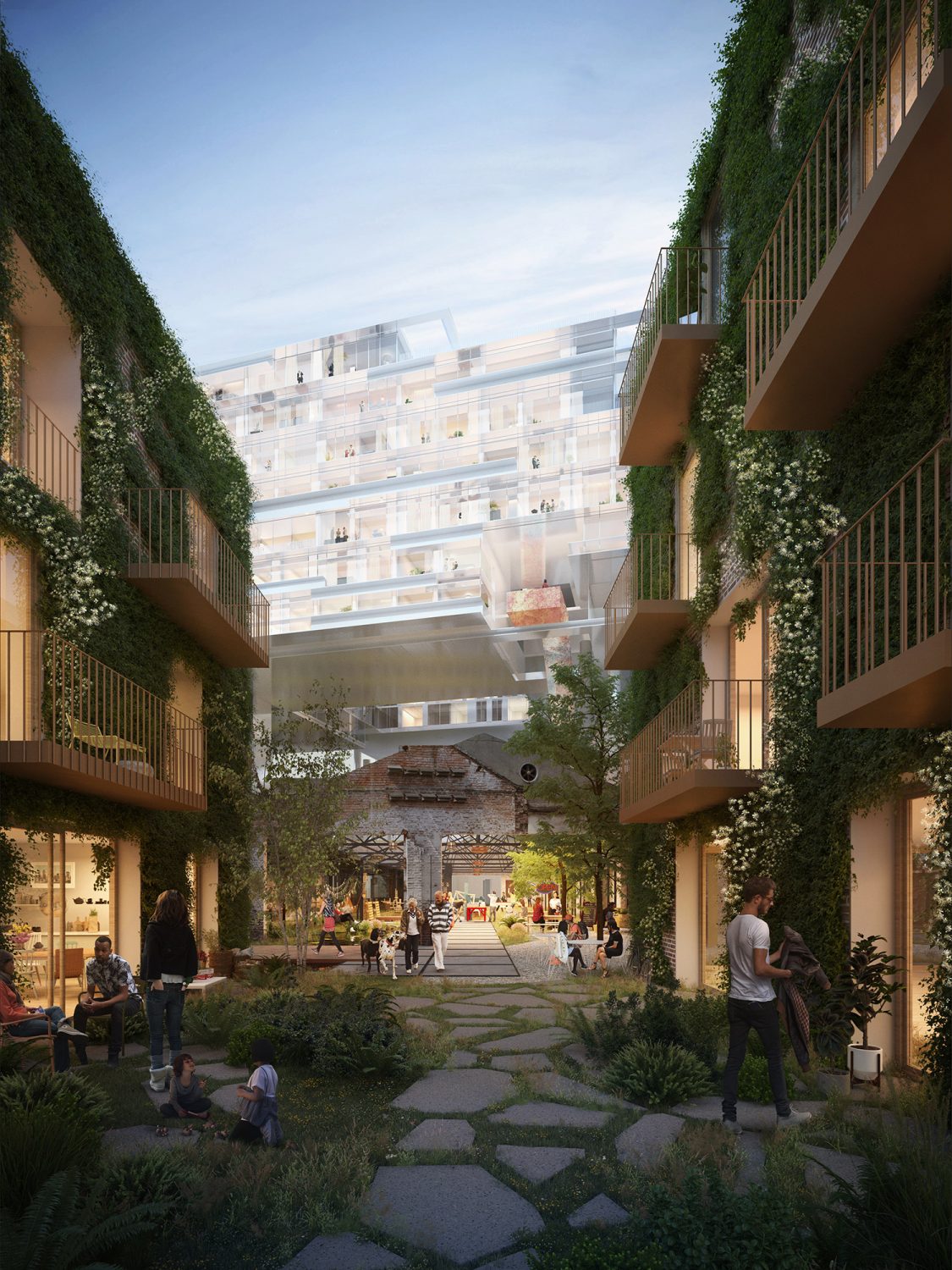 We wanted to keep all the old buildings, however dodgy sometimes; they give character to the place, while already so much history has disappeared in this city. By lifting the major part of the new building volume above the old ones we could set them free and keep them rough. Four iconographic high-rise elements are hovering above. The Roofscraper is the most prominent element; a horizontal icon that rises above the old nursery dormitory like a cloud. With a 40-meter-long staircase, you can climb the public roof terrace.

The now vacant part of the plot towards the neighboring small-scale neighborhood is filled up with a completely green covered small-scale living area, continuing the rhythm of the industrial buildings, creating a car free fairytale-like environment, where nature and other inhabitants can flourish. The ever-green ivy covering facades and roofs offers nesting place, food and shelter for birds, bees and butterflies all year round ánd clears the air! The walls and roofs underneath these plants are made of circular material, offering exactly the right texture and small holes that plants and feathered friends appreciate. Also, the scarce pavement is made of recycled concrete flagstones, where native plants flourish in-between. Pièce de résistance is the Biomakery; a subtropical green house in one of the old garages, purifying the sewage water in the plan. The surplus of clean water streams through the area as a new creek, connecting to the nearby old creek ‘de Dommel’. 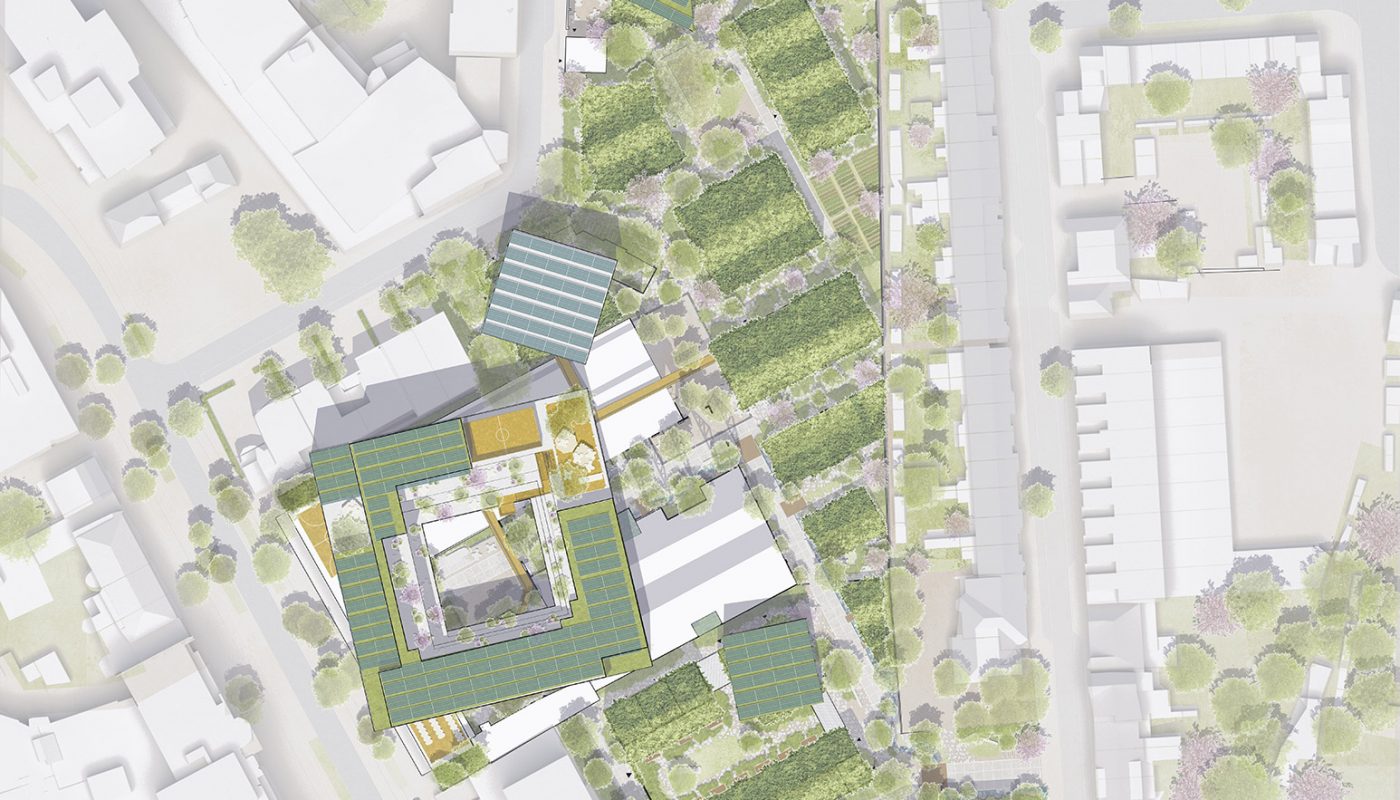 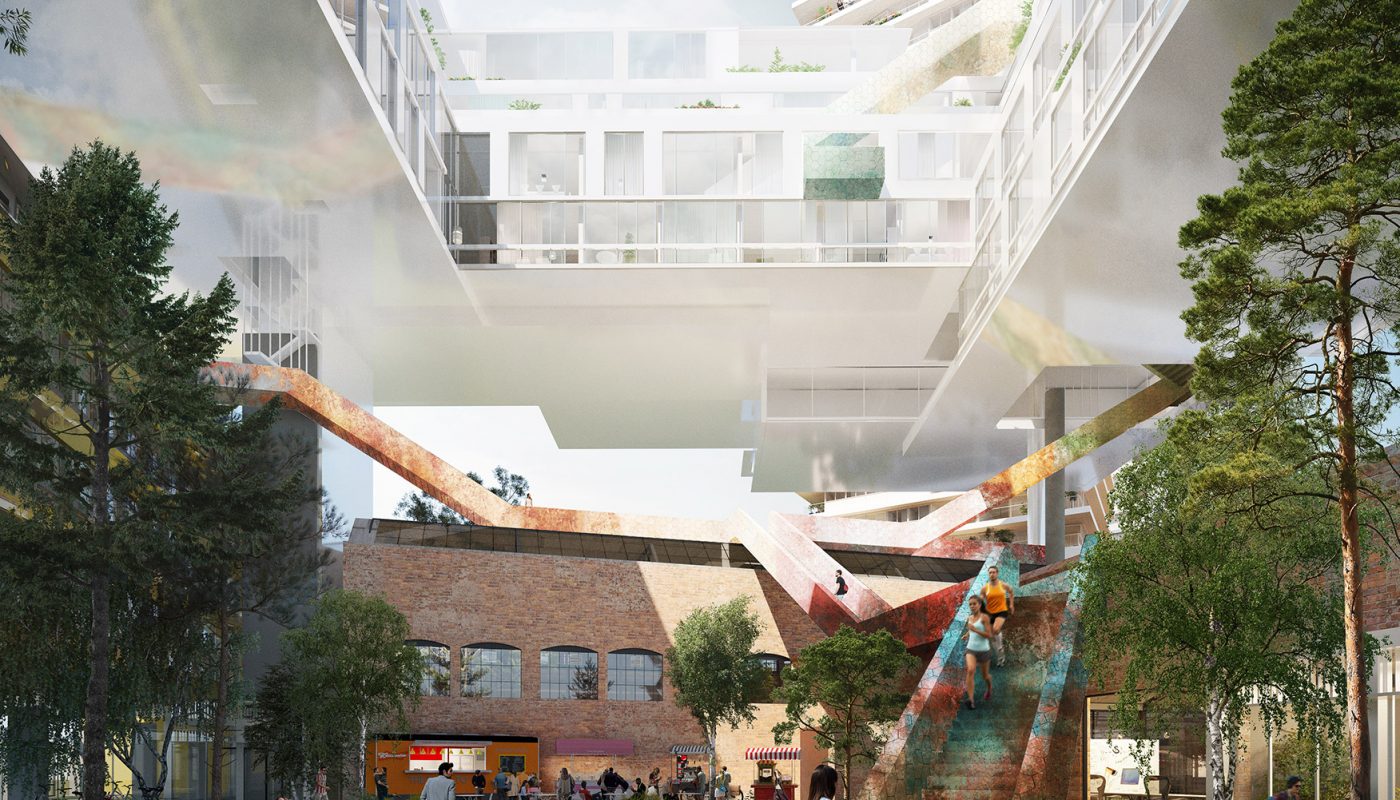 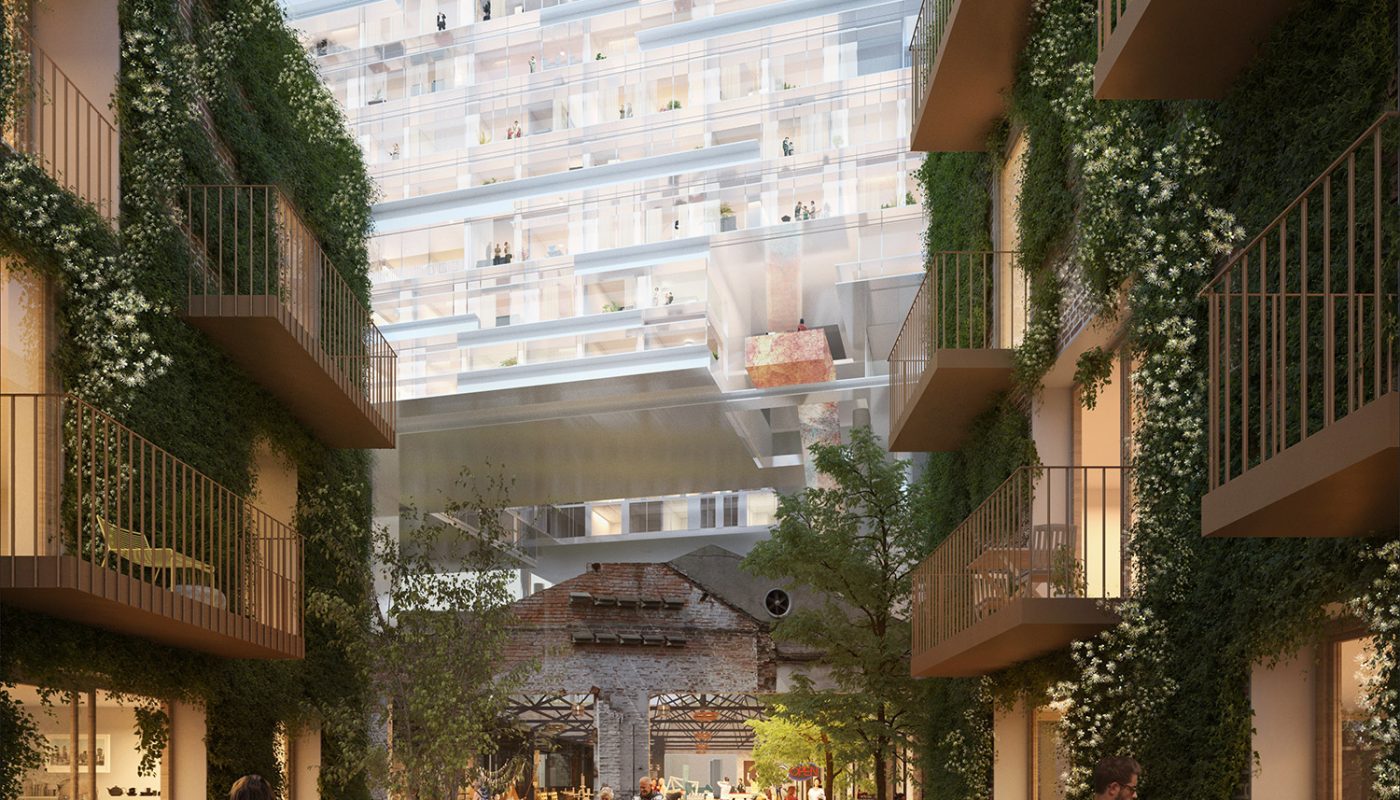 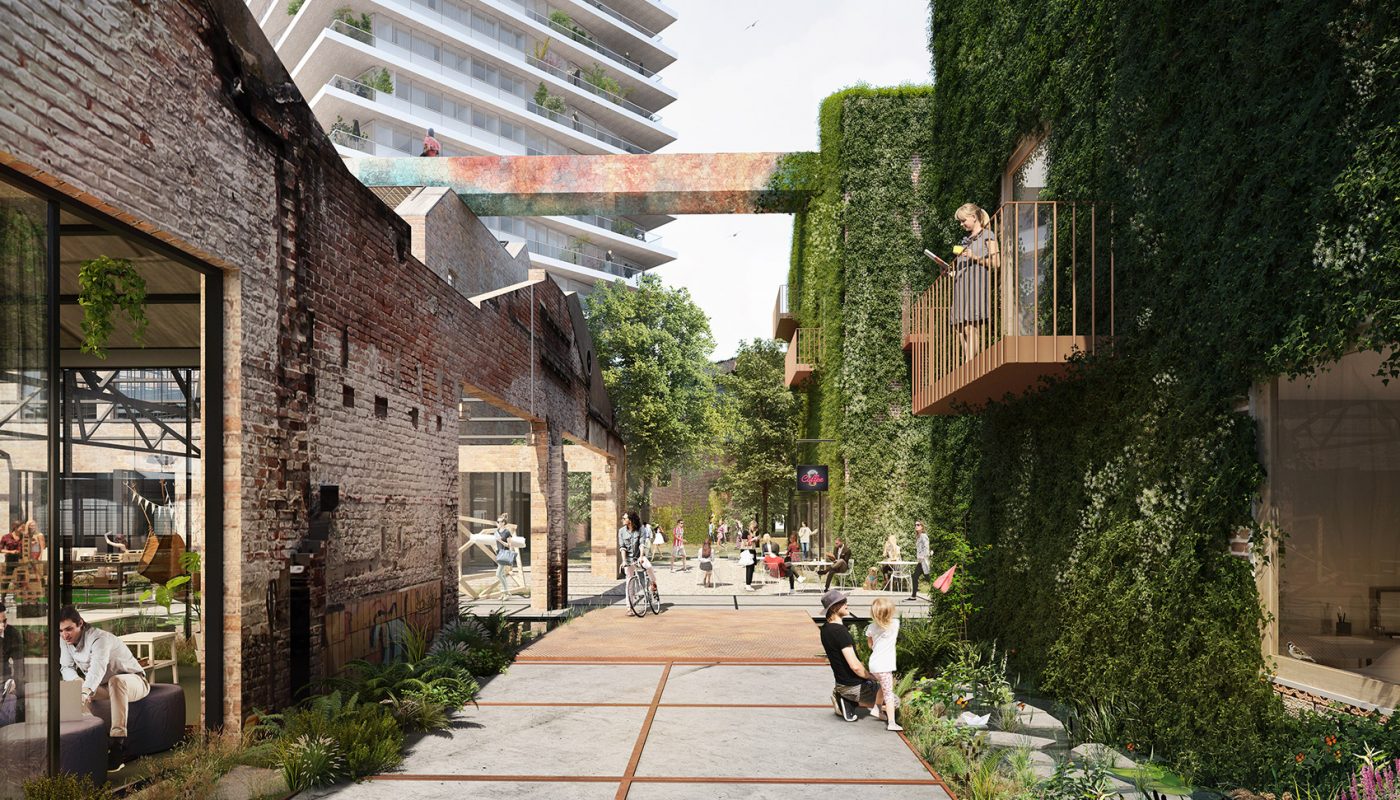 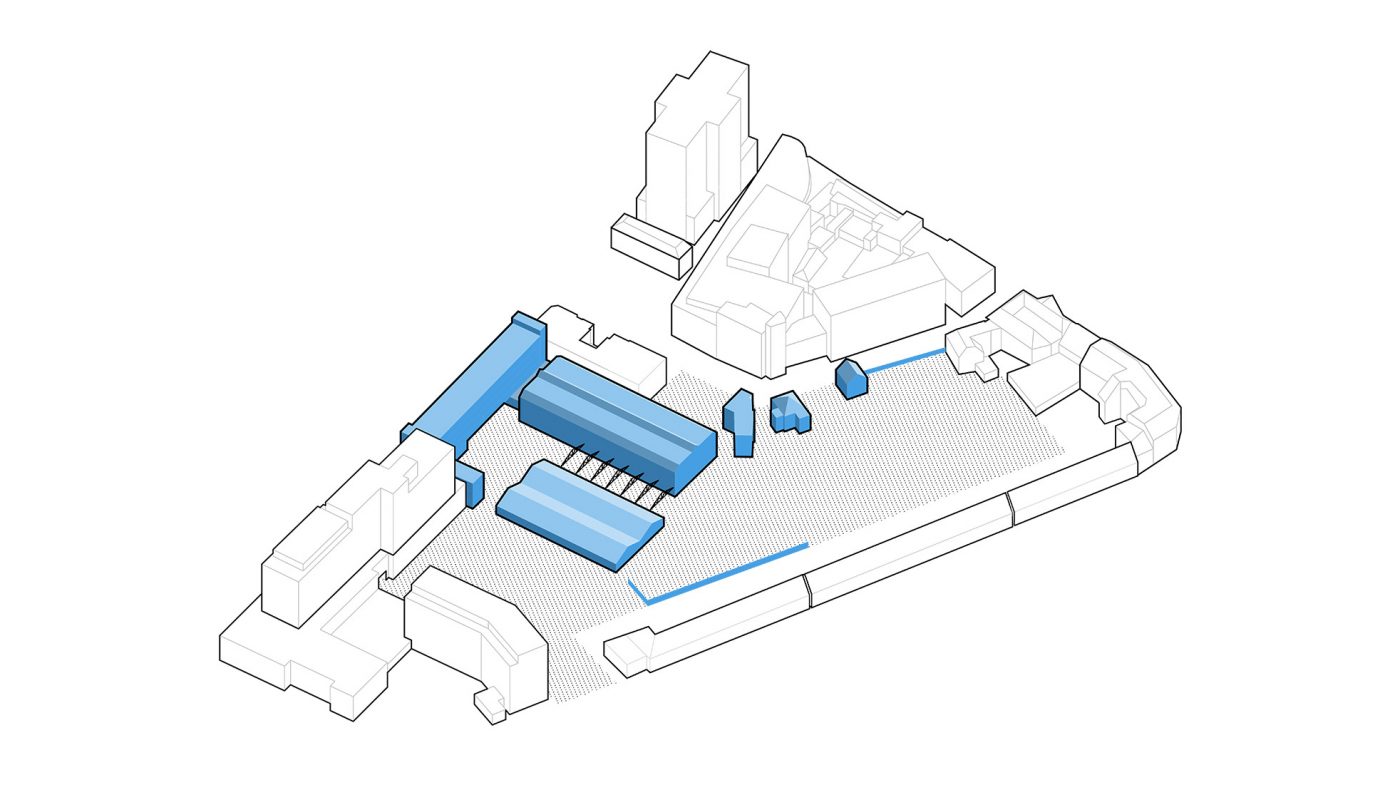 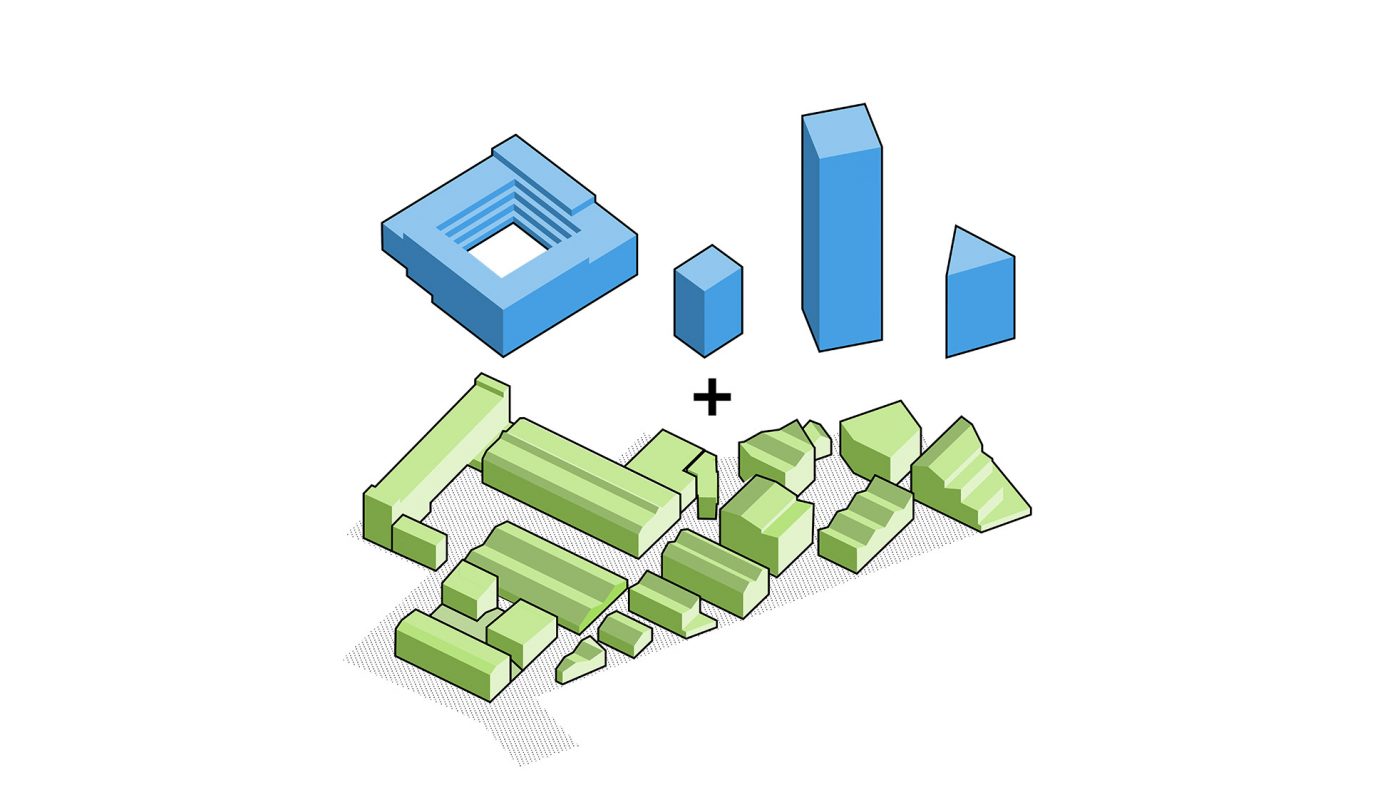 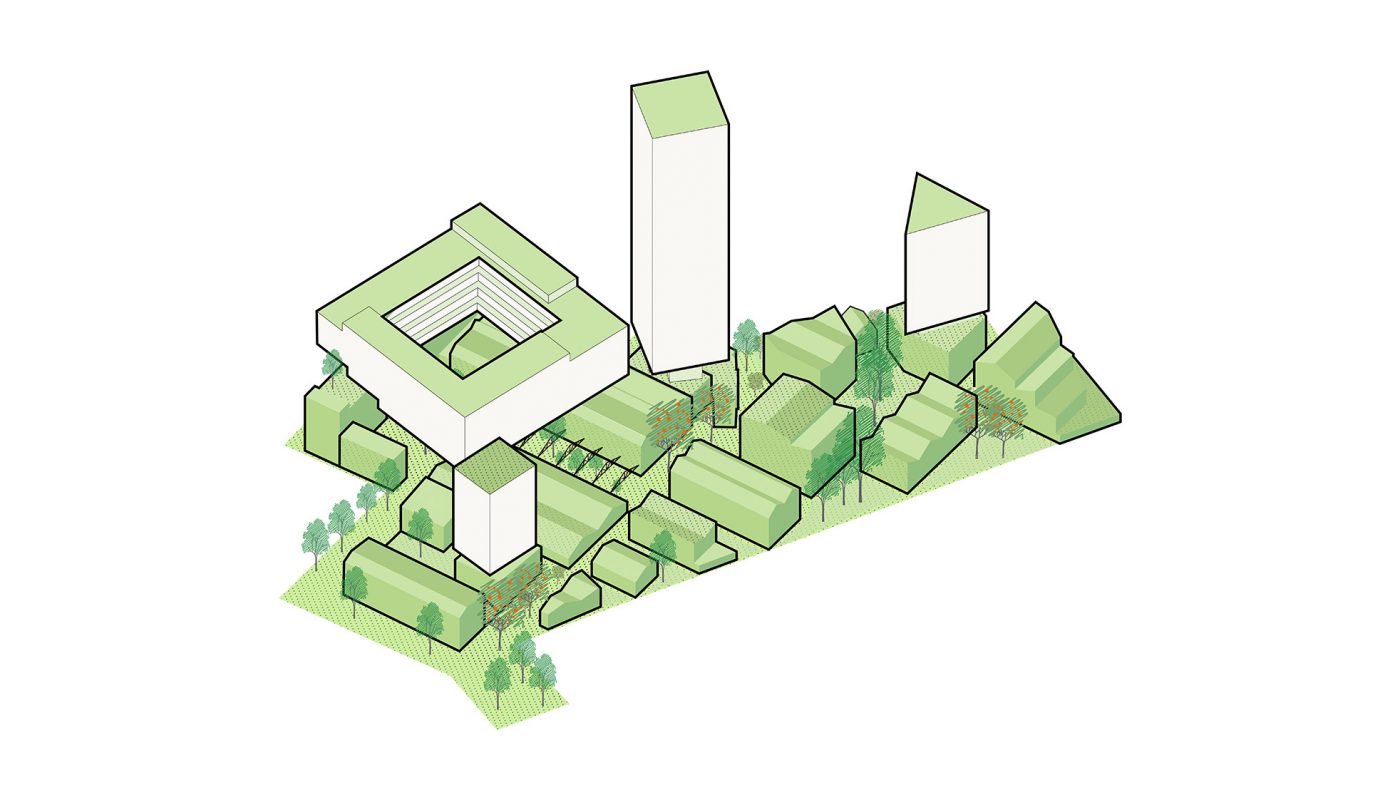 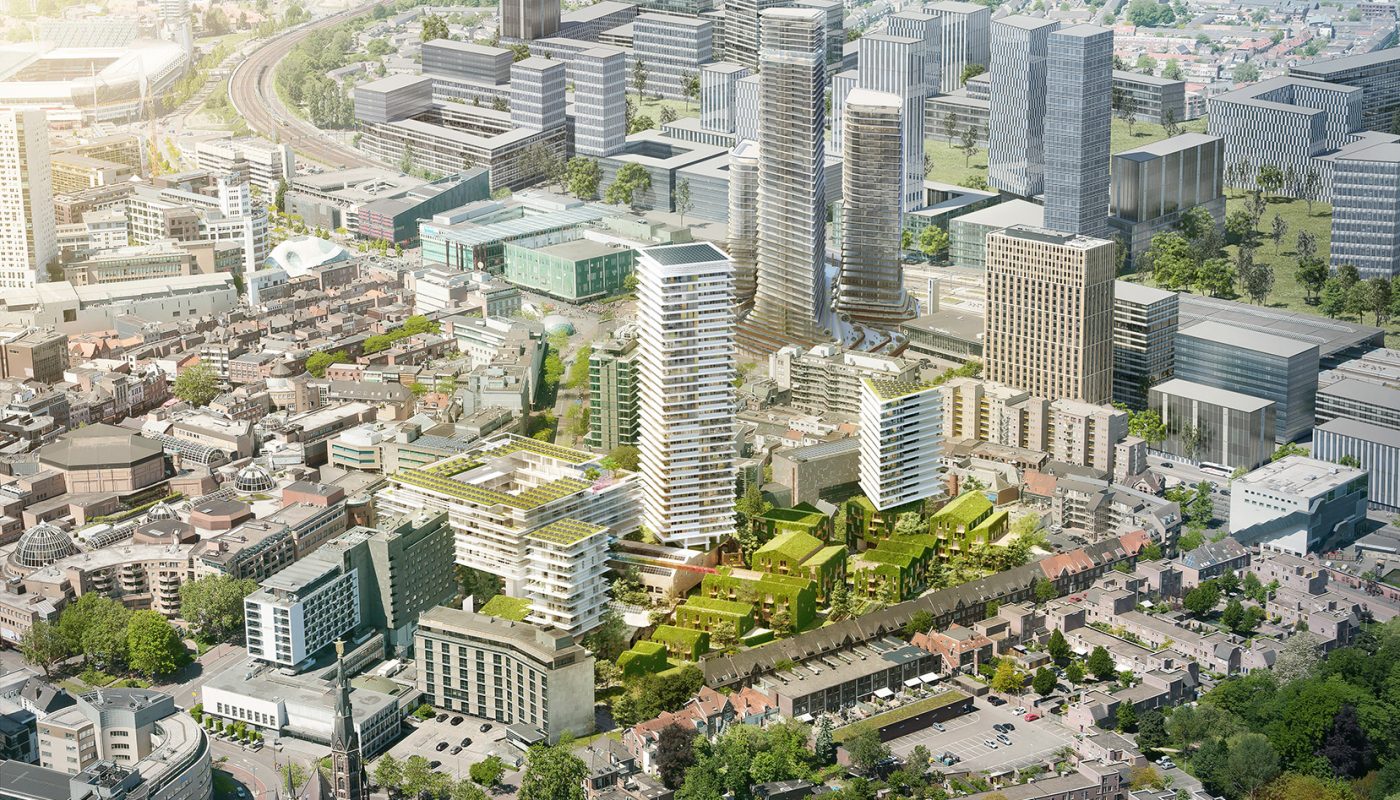 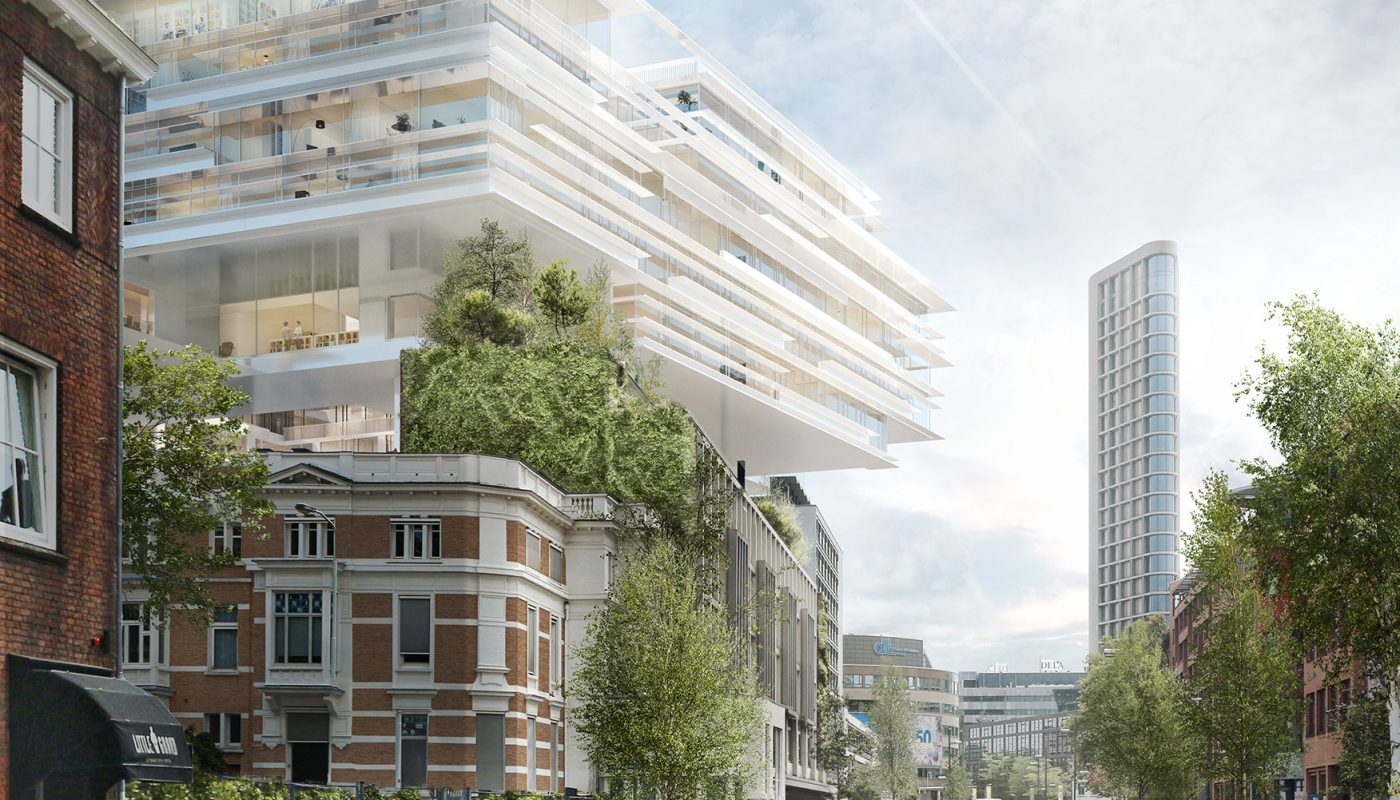 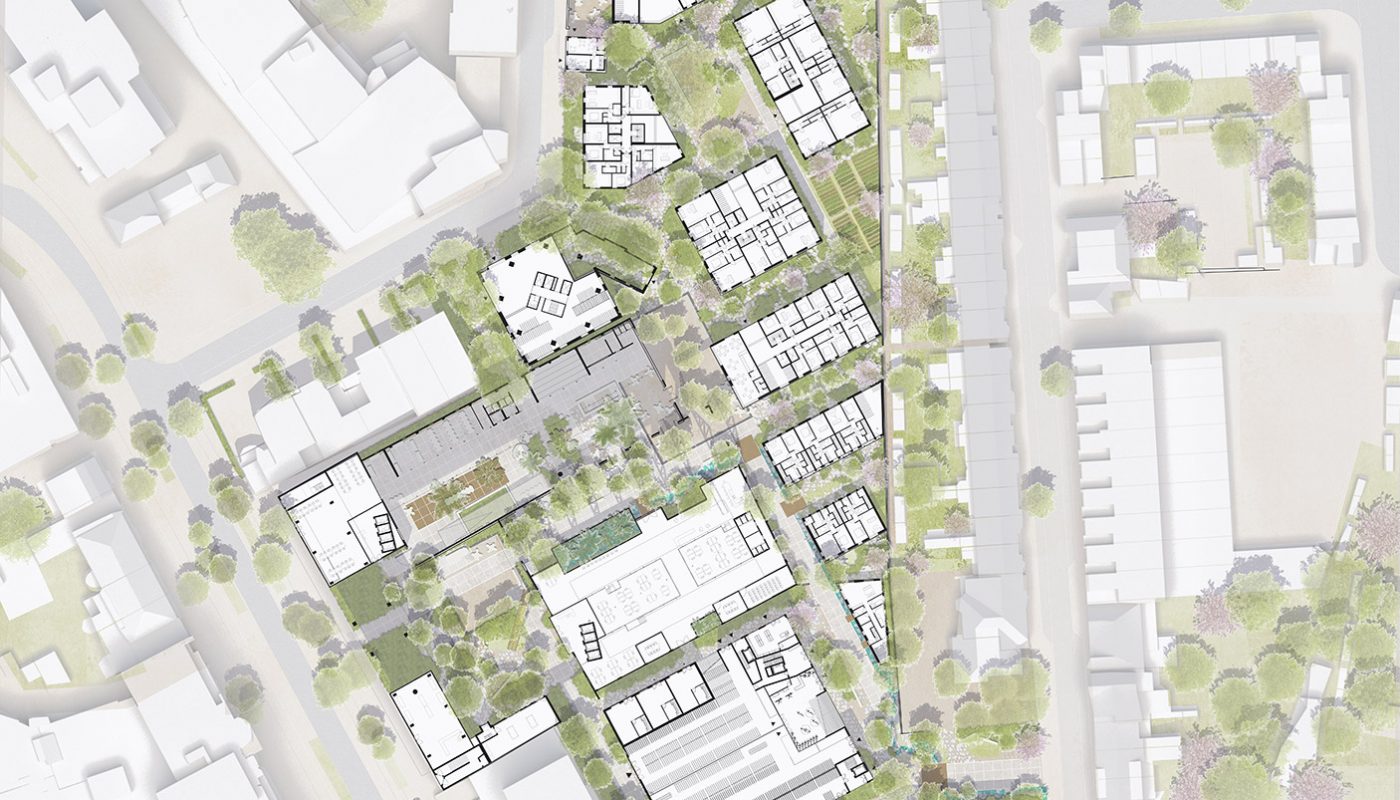 A green covered energy neutral circular city, floating towers, the sewage system as source for a new city creek. It sounds unrealistic but we did the works and crunched the numbers: this might be our most thoroughly thought out dream we won’t realize. At least not here, not now…